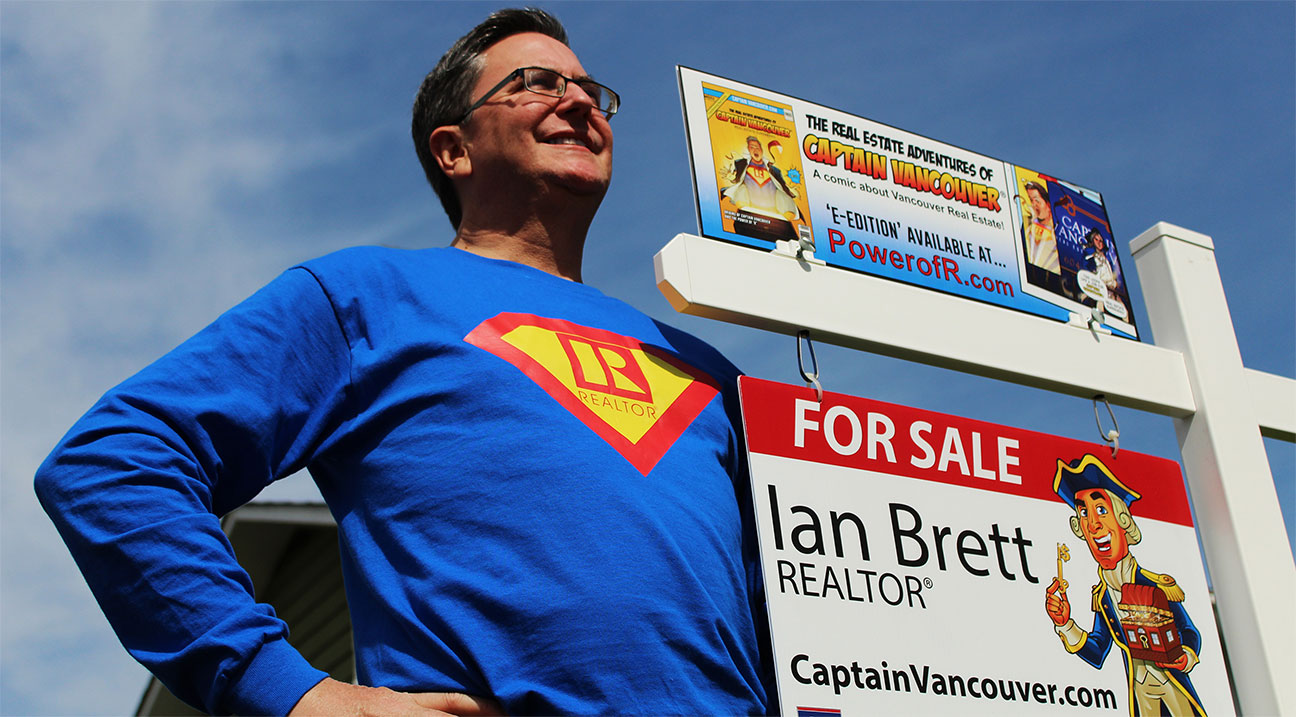 Welcome to the POWER OF R and the Real Estate Adventures of Captain Vancouver® Real Estate Superhero.

Vancouverites love talking about Real Estate. There is hardly a day that goes by when there isn't a news article on housing prices, affordable housing, shadow flipping, foreign investors, unscrupulous agents, citizens who don't have a million, and multi-millionaires who let their homes sit vacant while the city's rental housing crisis is at a breaking point and much, much, more!

Do you remember the Home Show (Ch 14 and Ch 16), the Real Estate Channel on TV that I started here in Vancouver back in the mids 80's? Well today I still leverge modern technnology. I started the Captain Vancouver® Real Estate Network to promote the extra value of all real estate services that I was offering. I was proud that I could offer more in the way of technology and services than most Realtors. I thought that good, honest service would be enough! My view of the Real Estate industry was simplistic. As a Realtor, I had a front row seat to the interworking's of an industry that places service, honesty and integrity last and sleazy marketing, questionable tactics, unquenchable greed first. I ended up just as disillusioned as many Vancouverites.

Real Estate in Vancouver had become less and less about 'great service' and value for the commission earned by Realtors, and more about what was wrong with the industry. The Real Estate industry seemed badly in need of a Superhero to rid the city of Vancouver of the Villains of bad Real Estate. So I became Captain Vancouver® Real Estate Superhero! Why am I a superhero? Well it's because I want to commit to going beyond the standards that Realtors promise to undertake when they get their license. I don't want to just meet the minimum expected standards. I want to exceed your expectations! Here is what I promise to you:


#1.
I'm committed to upholding all RE rules and further commit to upholding the highest standards of ethics (no funny business here!)


#2.
I get that times are tough and every bit counts especially when your moving. Tell me what's going on in your life so I can help! Part of how I help is by offering a High Tech Marketing and my Cash Back program


#3.
I promise to give you value for the commission earned. I pay out of my pocket for photography, videography, custom ads and more so that your home will be more attractive to sell for top value, and to a larger pool of potential buyers.

I'll help you navigate the rough waters of Real Estate in Vancouver, provide you with stellar service with a smile and always hold to the highest standards of integrity!

The Captain Vancouver® Comic series takes place in the fictional city called The Metropolis of Vancouver (aka Vancouver City). The series is about mild mannered Ian Brett, Realtor® who transforms into Real Estate Superhero Captain Vancouver®, protecting the city as he fly's on his 'FOR SALE SHIP' with his dog 'Buddy' (Yes, 'Buddy' is based on a real dog in case you are wondering.)

What makes Captain Vancouver® a real estate superhero you ask? Captain Vancouver® saves Vancouverites from the bad real estate shenanigans that have been going on, while at the same time 'super sells' homes with his amazing high tech Realtor super powers! Find out more about Captain Vancouver's Realtor Superhero powers by going to http://CaptainVancouver.com or send out a supersonic Real Estate signal to him at: 604-Your Key (604-968-7539)

Are you wondering about the 'characters?' Well we created all the characters in the Captain Vancouver® Comic series to be a parody. Our characters are entirely fictitious and created in good fun (just in case you're an ego-centric real estate agent who might think a character is based on them alone). We've morphed local celebs, media personalities, politicians, local Realtors and 'typical' Realtor personalities to create our characters. The stories…well that's another thing. If you're not from the Vancouver area you might be scratching your head wondering how our stories can have even a shred of truth to them? If you're from around here well then you know the storylines aren't totally fictitious…shall we say we have just embellished the stories a bit? All our comics are written by none other than our very own Mega Media Maven!

Yes, the style of our comics change with each edition. This is because we hire different local Vancouver artists who put their own style and special touch to each comic. We really like this because it shows the diverse talent available in Vancouver. The first comic was designed by D. Dao, and the second was designed by Frannie Q, both incredible young artists! Our next edition is currently being designed by Vancouver artist Bernardo Garcia. Hiring local artists is one way that we give back to the community.

We hope you enjoy our Real Estate comics!

Origins of Captain Vancouver and the Power of R

Captain Vancouver vs The Shadow Flipper


Sign up for future editions and make sure you visit my Real Estate website at: Captain Vancouver, the original Real Estate Superhero and high tech crusader.